A grand gala opens the Olympic culture festival in the capital 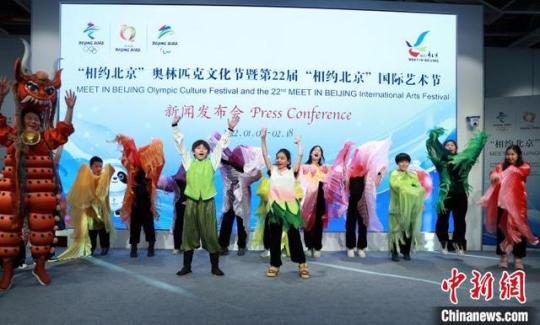 Children perform an excerpt from Flowers in the Mirror, a youth drama jointly produced by China and France, during the press conference of the Olympic Cultural Festival Meet in Beijing on Dec. 27, 2021. (Photo/Chinanews.com.cn )

A grand gala, titled See You in Beijing, will be held at the Tianqiao Performing Arts Center in the capital on Jan. 6, opening the 22nd Meet in Beijing International Arts Festival.

More than 100 musicians from the National Traditional Orchestra of China and the Suzhou Symphony Orchestra will perform during the gala under the direction of conductor Chen Xieyang, featuring Western classical music and traditional Chinese pieces.

The gala marks the start of the Meet in Beijing Olympic Culture Festival, celebrating the upcoming Beijing 2022 Winter Olympics and Paralympic Winter Games.

Zhao, president and principal pipa performer of the National Traditional Orchestra of China, said the creative team spent three months preparing for the gala. Chinese composer Tang Jianping has been commissioned to write a new piece of music, which will premiere at the gala.

Xie Jinying, director of the international exchange and cooperation office of the Ministry of Culture and Tourism, noted that the annual event will bring together 62 performances from 22 countries live and online until Feb. 18, covering classical music. , dramatic dance, Kunqu opera and Peking Opera.

“The Meet in Beijing International Arts Festival has become a platform for artists around the world to communicate since its launch in 2000. It has won a large fan base with a diversity of performances,” Xie said. “This year, the annual event will be held during the Beijing 2022 Winter Olympics, which will introduce Chinese arts and culture to a wider audience.”

Highlights will see Poetic Dance: The Journey of a Legendary Landscape Painting, an original Chinese drama from the China Oriental Performing Arts Group, choreographed by Zhou Liya and Han Zhen and inspired by A Panorama of Rivers and Mountains, a famous Chinese painting from the Song Dynasty (960-1279) artist Wang Ximeng, as well as a new Chinese musical, Ice Breakers, which combines ice and snow sports with music.

Chen Ning, director general of the culture and ceremonies department of the Beijing 2022 organizing committee, said a variety of cultural activities have been held in the capital since 2020 to prepare for the upcoming Winter Olympics. of Beijing 2022.

“Shows, exhibitions, films, TV shows and public events will be organized to celebrate the Olympic spirit,” she said.