A young violinist rehearses before the concert with a â€œmoÃ±oâ€, or bow, in her hair. (Photo by Claire M. Roney / Cronkite News) 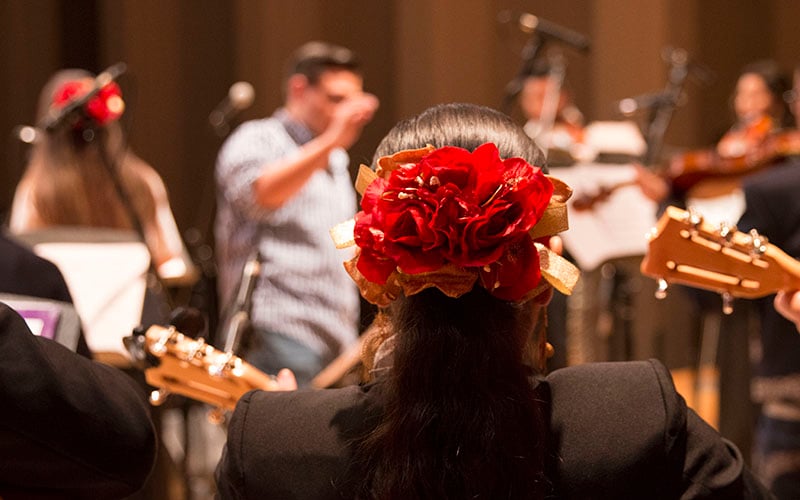 During a pre-concert rehearsal of the ASU Mariachi Ensemble, Claudia Sanson’s curls of hair contrast with her black jacket. (Photo by Claire M. Roney / Cronkite News) 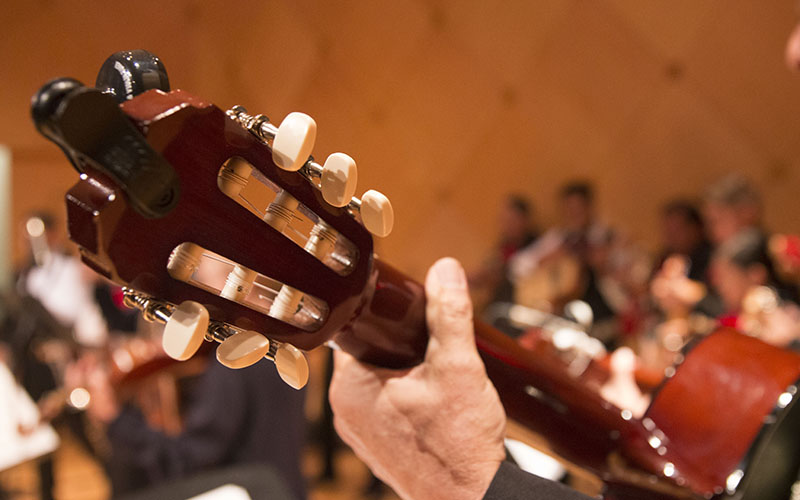 The guitar is one of the instruments that contributes to the unique sound of the mariachi. (Photo by Claire M. Roney / Cronkite News) 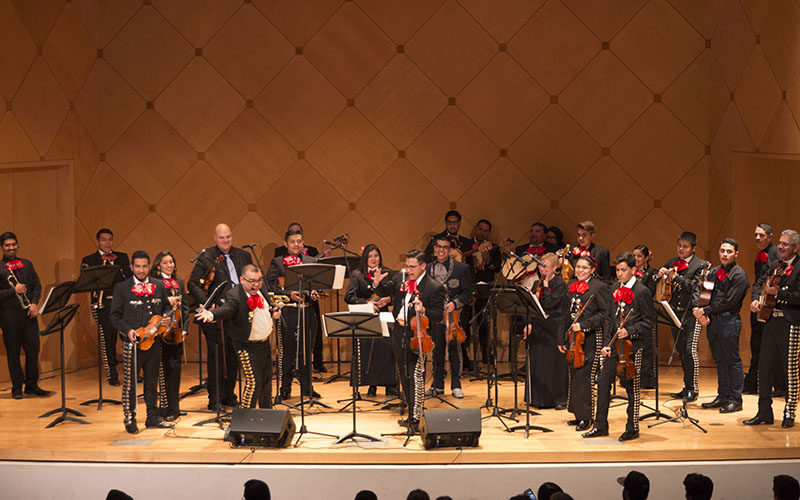 TEMPE – One Monday evening in September, Michael Smith was humming softly and scribbling the names of mariachi songs on a white board.

Smith, 25, is co-director of the Mariachi Ensemble at Arizona State University.

The origins of the Mexican folk music genre date back to the 16th century, and it is a fusion of indigenous, African and Spanish musical traditions. Mariachi is now part of the American cultural fabric and represents the social and political values â€‹â€‹of the Mexican people. On polling day, for example, a mariachi band performed outside the Trump Tower in New York in what some saw as a protest against President-elect Donald Trump’s campaign promises to build a border wall at Mexico’s expense and deport all undocumented immigrants.

Michael Smith’s interest in mariachi music was sparked when his Latina mother took him at the age of 5 to a mariachi concert in California. He remembers seeing a little boy come onto the concert stage, singing, dancing and playing the violin.

Smith said he felt the liveliness of music and its passion so much that he turned to his mother and said, “I want to do this.”

â€œI got a violin, showed up to class and just started learning music,â€ Smith said.

When he was 18, Smith played with Mariachi Los Camperos by Nati Cano in the Encuentro Internacional del Mariachi y la Charreria; an international mariachi music festival held in Guadalajara, Mexico.

â€œI erased the memory of being on stage. I don’t remember anything, for the life of me, â€Smith said with a laugh.

It was one of the happiest, most agonizing and exhilarating times of his life, he said.

â€œMariachi has evolved over the years: what started out as folk music, where a group of people got together and made songs and music, has become a group very similar to a jazz ensemble in the sense that we are a cover band. “Smith explained.

The ensemble began in 1985 under the direction of Richard Haefer. Haefer retired in 2011, and the mariachi class was dropped from the ASU curriculum. Mariachi fans, overwhelmed by the deletion of the class, stepped back and were able to resuscitate the course on the program in 2012.

Today, the ASU ensemble meets once a week and has 25 members made up of ASU students and community musicians interested in mariachi music.

Smith’s goal is to preserve the genre’s rich history while modernizing it with classic techniques and covers, such as “Can’t Take My Eyes Off You,” the Frankie Valli hit and The Four Seasons.

The end of the cultural and musical journey for the group, Smith and co-director Carlos Castaneda: the ensemble’s mariachi concert on November 28 at the ASU Tempe campus.

To be successful at the November 28 concert, to make it real, musicians would have to feel the music and play it skillfully.

The heritage of mariachi music dates back to the 16th century.

The indigenous peoples of what is now Mexico had long developed musical instruments by the time the Spanish conquistador Hernan Cortes arrived in Mexico around 1521, according to Histoire.com. Known for his cruelty and the slaughter of indigenous peoples, Cortes also brought musicians on his ship. According to Smithsonian Folk Paths, folk music is a fusion of indigenous, Spanish and African music. Instruments like the vihuela, a Spanish guitar, gave the mariachi its special sound.

Aurelio GÃºzman, 42, is a trained landscaper and a mariachi musician at heart. As he pulled the strings on his vihuela during a recent Mariachi Ensemble practice session in an ASU classroom, he said, “Music, I love it.”

GÃºzman didn’t come from a musical family, but he loved mariachi music so much that he decided to learn it in his early 30s, he said. He performed in a mariachi band called Luz Del Soro for about six years.

His favorite instrument is the vihuela, but he first learned to play mariachi music with a guitarron: a six-string bass guitar also required in a mariachi ensemble.

The big volume and weight of the guitarron combined with the heavy mariachi costumes make for a sweaty performance, he said, but the joy of playing the mariachi made up for the discomfort.

â€œYou know, if you like what you’re doing, it’s not work,â€ GÃºzman said with a laugh, preparing for the first song in the class.

ASU student Marques Maldonado, 25, warmed his voice in a corner of the classroom.

â€œMariachi’s music speaks of the heart and the soul, whether romantic or sad. It’s a genre of music originating in Mexico that will always be played, â€he said.

His trumpet rested between his legs as he repeated the words to a love song. He patted his knees, drummed his fingers, and took a deep breath.

The members raised their instruments for the first song. Silence fills the room. Then, violin sticks were passed over taut strings, fingers plucked and brushed on guitars, trumpets sounded, and Maldonado sang a song called “Loco”.

Trumpeter Anarbol Martinez lifted his head high and gave a shrill cry as the song played: a grito.

It was a cry of joy, and it was loud.

‘Drop something on your big toe’

Grito, which means â€œthe cryâ€ in Spanish, is closely associated with mariachi music and can be a cry of pain, joy, remorse, anguish, relief, love, or all of these things at once. .

On September 16, 1810, Catholic priest Miguel Hidalgo y Costilla presented the “Grito de Dolores” to a crowd of Indians and half-breeds, begging them to take up arms against their Spanish rulers during the Mexican War of Independence.

According to Library of Congress, the priest shouted: â€œMy Children, a new dispensation comes to us todayâ€¦ Do you want to free yourself? Will you reclaim the land stolen 300 years ago from your ancestors by the hated Spaniards? We must act immediately.

Every year on September 16, Mexico celebrates its Independence Day around the world with a reenactment of the Grito de Dolores.

The grito traditionally ends with three cries of “Viva Mexico” in honor of Mexico’s Independence Day and in remembrance of Hidalgo.

The Independence Day grito has a more musical mariachi version.

In mariachi, each grito is unique to the singer’s passion.

â€œWe get a lot of questions about gritos [during performances], so we’re doing a demo with the audience and my preference has always been to say, â€œdrop something on the big toeâ€ and express the pain, â€Smith said.

“And they loved it”

For months, the ASU Mariachi Ensemble had been training for the November 28 concert, and the day had finally come. The evening was cool and the musicians arrived at Katzin Music Hall on the ASU Tempe campus around 6 p.m., dressed in mariachi costumes under their winter coats.

As the musicians took the stage to practice songs, co-directors CastaÃ±eda and Smith were last-minute coaches, helping the musicians tune the instruments and adjust their position on the stage.

The energy was there, the musicians were ready to go.

After the practice was over, around 225 people entered the music hall.

Backstage, musicians chatted in Spanish, made jokes, and adjusted their moÃ±os: oversized whimsical knots used as ties for male musicians or as hair adornments for women.

At 7:30 p.m., the ensemble entered the stage smiling almost as if they were going home. Friends and relatives applauded the musicians, releasing a grito every now and then.

Smith and CastaÃ±eda provided a brief introduction in English and Spanish before joining the ranks of the ensemble to play a catchy instrument that set the tone for the lively atmosphere of the evening.

La Cigarra, a song about a cicada singing in the face of death, followed by a robust ending by the booming singer Claudia Sanson “la ci-gaaa-rrrr-aaah”. The crowd jumped to their feet, cheering the singer’s message of sadness and triumph.

Maldonado and Smith moved away from traditional mariachi with a performance of â€œCan’t Take My Eyes Off Youâ€ by Frankie Valli and the Four Seasons. The crowd seemed surprised and amused by the sudden change – a 1960s pop hit turned into a mariachi song.

The evening was a non-stop excitement and bustle: the audience sang, applauded, applauded and bellowed gritos with the ensemble.

The musicians never seemed to want to stop playing, but at the end of the concert, the musicians bowed in gratitude.

GÃºzman, the vihuela player, marveled at the intensity and enthusiasm of the audience as he stepped off the stage. He had performed in the ensemble for several years, but he had never seen anything like it with this audience.

â€œI think it was really, really great,â€ he said. “You know all the shows are great, but this audience was so happy. They were clapping, singing and clapping. And they loved it. I loved it.”