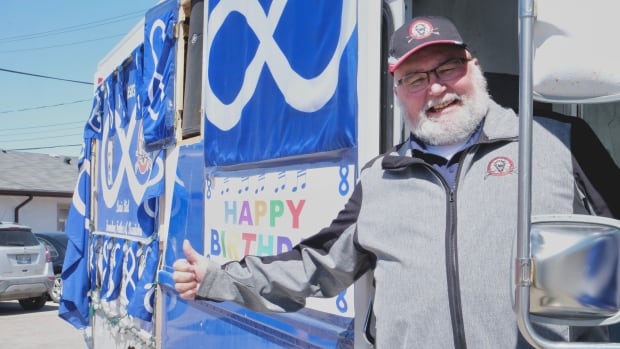 A local MÃ©tis chief from Selkirk, Manitoba brings a sense of pride to the young and entertainment to the elderly by playing violin music from his MÃ©tis music van.

“We are in the homeland of the MÃ©tis, when they hear music, violin music is our music,” said “Bucky” Anderson, Minister of Culture and Heritage for the Manitoba MÃ©tis Federation (MMF) .

Anderson is also vice-president of the Interlake MÃ©tis Association of the MMF.

Anderson’s music van has become “famous in Selkirk” over the past year for showing off a piece of its culture in a city of 2,500 MÃ©tis citizens.

“They tell me they love music. Even at the grocery store little kids come to me ‘This is Bucky, this is Bucky’, so that means a lot. It gives me the inspiration to keep going.”

For about 20 hours a week, Anderson drives the van through the streets and kicks off a 20 song playlist that features some of his favorite MÃ©tis songs on the side of the vehicle. As Anderson tours through town, he is greeted, honked, and approved by people along the way.

Over the past year, Bucky Anderson has taken MÃ©tis music to the streets of Selkirk, Manitoba. 2:42

He came up with the idea for the music van last year when people couldn’t come together for events like Indigenous Peoples Day and Canada Day.

“I had this van sitting there and I was like, well, why don’t I bring the music to the people?”

Anderson drilled holes in the side of his 1998 Chevrolet P30 van, installed speakers in it, hooked it up to a generator, splashed the blue and white van with a bunch of MÃ©tis flags and memorabilia and s ‘is set to boost the morale of people in the city.

â€œOur goal is to promote our culture and our heritage. And I think we’re doing the job,â€ Anderson said.

Throughout the week, Anderson tours and stops at a few local schools, often handing out small blue MÃ©tis flags.

One of them is Ruth Hooker, an elementary school where 80% of the students are Indigenous.

For Anderson, the stops are an opportunity to instill a sense of cultural pride.

â€œWhen they learn about their culture and heritage in school, the seed is planted,â€ Anderson said.

Heather Fontaine, teaching assistant at the school, said “It is important that our students see their culture reflected where they can see it”.

“We go out to recess, we hear this music, they start running and screaming and screaming. They are so happy, they dance. And it has been a really happy experience for everyone.”

Relief to the elders

Among its biggest fans are the residents of the Knights Center, a residence for people aged 55 and over.

â€œSo many people are depressed to be locked in this alone,â€ said Kathy Matson, a resident of the center.

“And as soon as we hear the music, they’re on the balconies clapping, waving and thanking him for coming down.”

Anderson said he recently took a short break from illness and people started calling him when they haven’t heard the van for a few days.

Although he is sometimes offered money for tours, Anderson said he was okay with being paid with cookies, donuts and the reactions he got on his travels.

He hopes to buy a newer van so he can travel longer distances.