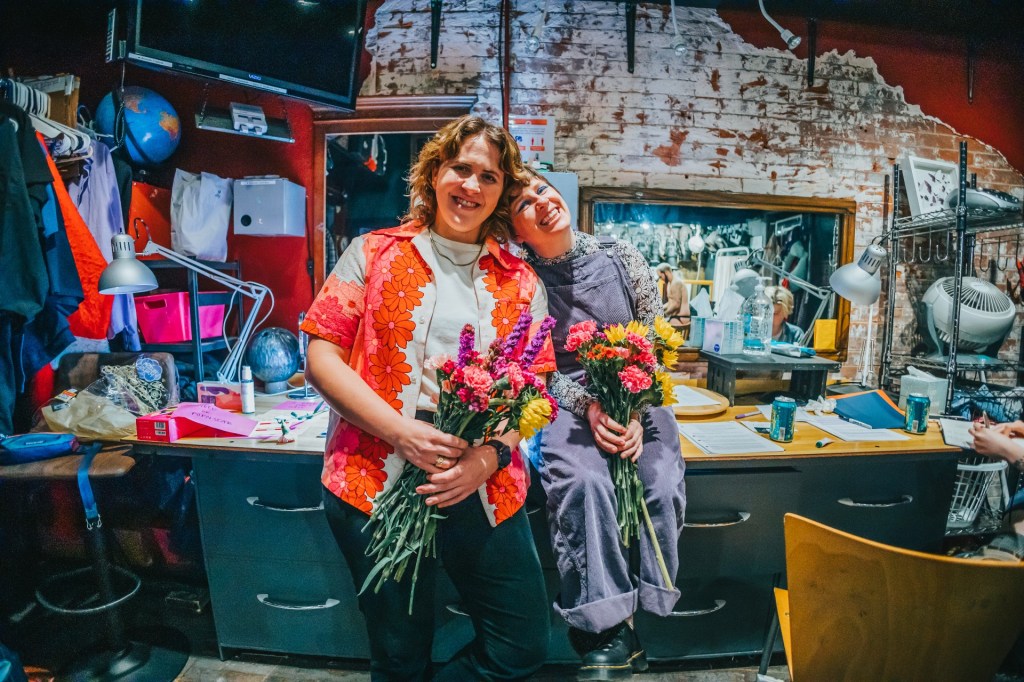 One of the best things about Camp Dyketopia isn’t the on-stage speed dating, the petting zoo, or the Witch Wellness tarot readings. It’s the fact that it happens at all.

“I feel really lucky to have the audience that we have,” said Lee Robinson, the 30-year-old co-creator of Denver’s monthly comedy showcase Dyketopia, which inspired the camp-themed event. October 8 and 9 at Littleton’s Ellsworth Farms. . “They accompany us in many crazy hijinks, whatever they are.”

It’s open to everyone, but also provides a safe space for gay people and women, Robinson said. It follows Dyketopia’s rapid evolution from an impromptu monthly joke party to a famous brand of comedy. Robinson and Dyketopia co-host Kate McLachlan has only been running her showcase for about a year, having started out as a backyard show in the pandemic era. But audiences quickly embraced them, and all of Dyketopia’s recent window displays have sold out in less than five minutes, said Robinson, who uses the pronouns them/them.

This has forced them, McLachlan and producer/comedian Kate Stroebel to steadily increase capacity – now to 200 people per show – with sets on the X Bar’s terrace, following venues such as Wide Right and the Bug Theatre.

The ambitious Camp Dyketopia was launched after win a $10,000 scholarship from ticketing company Eventbrite. All of the people and shows awarded through Eventbrite’s Reconvene Accelerator program “represented the future of events,” Eventbrite CEO Julia Hartz said in a press release last month.

“Ten thousand dollars does not cover the entire budget. But it was a big help and they also provided a lot of education and mentorship — like everyone else in the Denver comedy community,” Robinson said. “It’s definitely a learning (curve). I didn’t know how much Porta Potties cost, and now I know those details.

Robinson also wanted to offer live-stage tattoos, but soon ran into laws that made this impossible. Other than that, she said, it’s her dream event: a supportive space for audiences and performers who may have encountered mockery, or worse, in other cultural contexts.

“I was nervous when I first went to a comedy show, because (gay people) are so often targeted by straight people,” said Robinson, who has been acting for about six years. year. “It’s not safe, and more importantly, it’s just not fun. Nobody wants to be (fucked) by a lame dude.

Underserved audiences have also embraced new series such as Sie FilmCenter’s cult queer film show, Rainbow Cult. This joins the long-awaited diversity in the comedy scene of shows such as Faded, centered on black and brown comics, according to producer Jake Browne (next show is Oct. 21 at the Bobcat Club; $20 at fadecomedydenver.com) and Deadroom Comedy, which puts on all-Native American stand-up shows (upcoming: the Colorado Native show at Hi-Dive on Nov. 13; $12 at hi-dive.com)

They rely on pioneers like Pussy Bros. (female-only/queer comedy), the LadyFace sketch group, and the late Heather Snow, who ran Ladies Laugh-In at defunct venues such as Beauty Bar. Stroebel is part of that legacy, with his monthly comedy Firecracker! show (next: Oct. 27 at Mashroom Studios; katestrobel.com/shows; $10). Like all, Dyketopia has found a loyal following by being open to all types of fans while serving very specific audiences.

Regardless of their line-up, audiences followed the “12 Days of Christmas” like drag performances, nonsensical PowerPoint presentations, and “Choose Your Own Gayventure” stories.

“(Stroebel) drunk bought Barbie tarot cards on Etsy one night, and the idea for the show basically started out as bad astrology readings,” Robinson said with a chuckle. “Now we’re doing a themed camp even with plant propagation workshops and an artist portrait booth!”

Posters and design elements for the camp feature the artwork of Denver-based illustrator and author Sofie Birkin, a British artist whose clients include Apple, Nike and Playboy. Amid projects such as books (two so far) and site installations (she has her own room at the Meow Wolf Denver Convergence Station), she sells Dyketopia products to support the camp, along with bags in branded canvas, sweatshirts, hats and prints (sofiebirkin.com/dyketopia).

The event runs primarily on ticket sales, Robinson said, and has already sold a few hundred.

“Sofie paints a picture face down in the hole, like those old seaside paintings, to take pictures,” said Robinson, who happens to be Birkin’s partner. “We were so taken with Ellson Farm on our first visit. It’s just the right vibe for this event, which started out as an outdoor show, so being back in nature feels so good.

Subscribe to our weekly newsletter, In The Know, to receive entertainment news straight to your inbox.