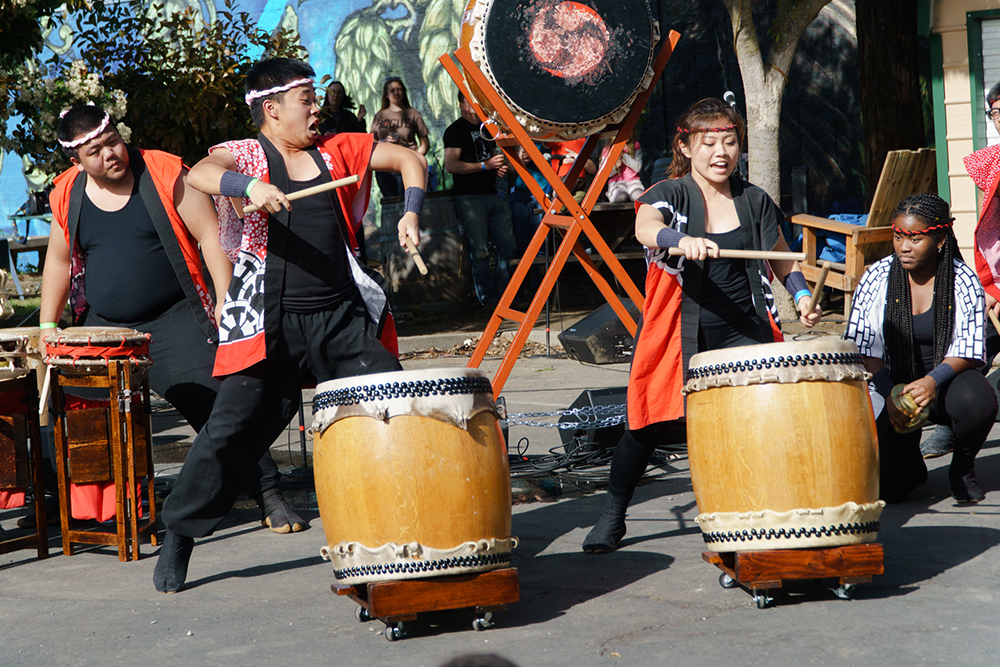 The fourth annual Davis Cherry Blossom Festival, April 6-7, will be a regional music festival and celebration of Japanese culture.

The event includes two stages with music and lots of traditional Japanese drumming. There will be food and art vendors, a gallery of local artists, interactive educational and cultural demonstrations, games and more. All of this celebrates the annual arrival of pink cherry blossoms, revered for centuries as a symbol of the beauty and fragility of life. Known as the sakura, the flower is the national flower of Japan. The flowers often coincide with Buddha’s birthday, celebrated on April 8.

Over 30 musical artists will perform over the two days of the festival, including Tanukichan, Jessica Malone, The Brothers Reed, The Midnight Dip and Big Sticky Mess. The event is made possible, in part, by a grant from the City of Davis Arts and Cultural Affairs Fund.

City of Davis arts and culture officer Rachel Hartsough said the event promises to be a weekend full of wonderful family activities. “The city is pleased to add the Cherry Blossom Festival to its list of city-supported public events that celebrate culture in our community. We love that the organizers of Cherry Blossom have been incredibly innovative in creating an event that is open to all, champions many facets of the arts in Davis like taiko and origami, and is mindful of leaving a lasting positive impact on the community. community.

Sudwerk will sell a limited-edition sakura (cherry blossom) beer in 16-ounce cans, and Davis Creamery will serve Japanese cherry blossom ice cream. A percentage of proceeds will go to My Sister’s House, a regional shelter specifically for Asian women and those affected by violence and human trafficking.

“Sudwerk is thrilled to see this festival – in its fourth year – evolve into a regional celebration of Japanese culture,” said brewery co-owner Trent Yackzan. He said beer lovers in the region will be able to buy the hoppy, hazy Sakura Haze lager in local supermarkets even after the festival ends. The beer contains Galaxy, Melon and Mosaic hops and contains 6% alcohol by volume.

What started as a student-run event has grown exponentially, with attendance last year estimated at more than 2,000 people over the two days. The festival, or matsuri, celebrates cultural and artistic diversity as well as the beauty of nature.

“Our festival celebrates the diversity of voices shared through music, and through our history we see music as a powerful instrument of social change and a voice for peace and understanding,” said Gregory Wada of Bakuhatsu Taiko Dan. .

Street Cravings and Pollo Inferno will have their food trucks there on both days. On Saturday, Koizora, Underdog Grill and Davis Creamery will also be there. On Sunday, Dumpling House and Puros Churros will be there. Other vendors include: Kobe Mini Mart, Korndogg Balloon and Face Art, Farm Fresh to You, and SAFE Credit Union.

Bakuhatsu means “explosion”, representing the intensity of their performance energy. Bakuhatsu Taiko Dan performs locally and regionally, with a mission to share the love of taiko and promote experiences with Asian American art and culture.