Korean culture festival made me shed a tear

OPINION: I would be lying if I said that I didn’t shed a tear in the darkened auditorium during several performances at the Korean Culture Festival held on May 28.

I was so captivated by the energy in the room from the moment ROK Ambassador Sang-jin Lee expressed his vision that the K-Culture festival could continue to strengthen relations between Aotearoa and Korea.

The tears continued to flow during Te Ohorere Williams and Jason Bae’s stunningly beautiful performance of Hine and Hine. I have never felt more awe in the auditorium of the Michael Fowler Center before than in the moments after the play ended, when the quiet, comfortable silence contained the energy of anticipation of what the day had in store.

It wasn’t until the day went on that I realized that the breaks after each performance were probably the only times the building would be quiet, as each floor had its own set of interwoven animated noises.

On the ground floor, you could hear the warm greetings to newcomers to the festival, the driving percussive rhythms of Samul nori (사물 놀이), all combined with the singing of brave people who shamelessly engaged in karaoke in the home.

Upstairs, the sizzling sounds of jeon (전) and the floating scent of spicy ttoekbokki (떡볶이) were prepared for the eagerly waiting customers. It was also the place where I enjoyed dishes I had never tried before, including a Korean fish cake called Eomuk (어묵) and an irresistible drink called yuzu-ade.

Warmth also radiated from the people on this floor, as they happily ran around trying on Korea’s national costume called hanbok (한복) or trying their hand at traditional Korean crafts called Jogakbo (조각보). Intermingled were the sounds of patient volunteers guiding people on how to read and write their own names in hangul (한글) with beautiful calligraphy brushes. 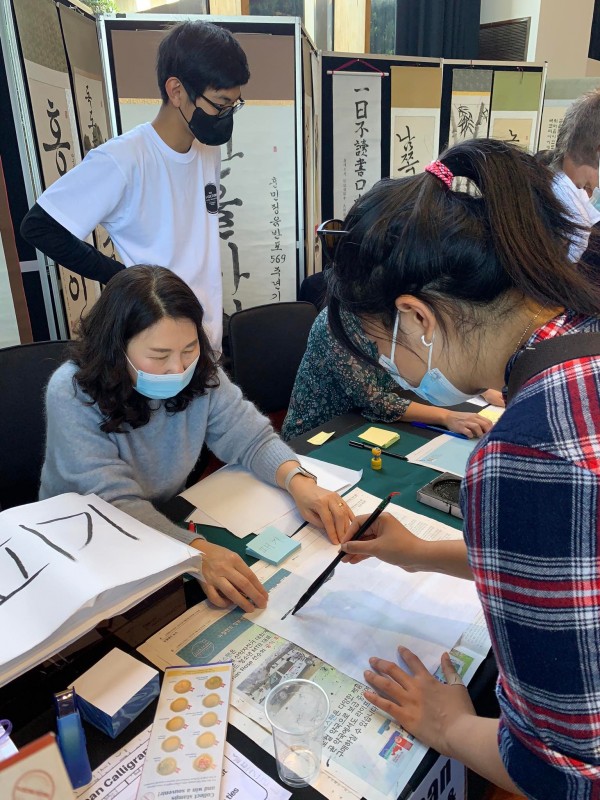 Also present were the sounds of curious people asking about courses offered by the Korean Education Center in New Zealand, traveling to Korea and checking out Korean ceramics. Every person I met at a stand was very nice; this was especially evident when I spent a good 20 minutes inquiring about the free Korean lessons in detail and again when I had a slight panic about my knowledge of Korean culture when I was forced to do a short pop quiz. During my panic, I looked across the floor and saw adults enjoying games such as ddakji (딱지), which I recognized from Squid Game, which reminded me that not knowing the answers to a short quiz is not so bad.

I’ve played ddakji (딱지) once in my Korean lessons, and one thing I’ve always liked about my teacher is how he incorporates aspects of learning Korean culture into every lesson. They have always been the parts of the lessons that I look forward to the most.

Attending this year’s K-Culture festival gave me so much joy because it brought those lessons to life with such vibrancy and wonder. And I was clearly not the only one feeling this. I could see it in the way people were rushing to try the hanbok ten minutes before the end of the event and seeing faces in the crowd that I had also spotted at the start, still hanging around at the end in order to enjoy the maximum of their time. 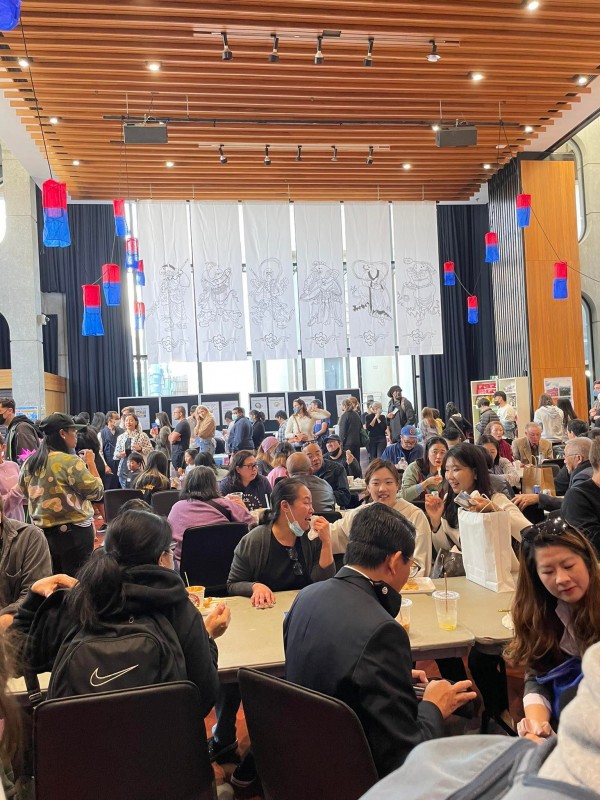 Indeed, it is in these small moments, like at the end of a show or while waiting for my second round of milk tea (oops), that I have contemplated the opening speeches of the event. I have come to realize how wonderful it is that building relationships between nations can be accomplished with such beauty and pleasure. I had previously thought of this type of relationship building as that remote, scary thing that only businessmen in formalwear can do. However, during the festival, I saw that relationships can also be fostered through connection, learning, and openness. Regardless of your knowledge or experience of Korea, your background or your age, you have been welcomed to the K-Culture Festival.

The other fabulous thing about such events is that they also provide ways to build deeper relationships with each other, not just between nations. Thanks to the experiences I had at the festival, I had several things to share with my Korean language learning classmates, I had more things to discuss with my friends at dinner and with colleagues who asked me questions about my weekend. Knowledge sharing doesn’t have to stop when the event closes.

If you weren’t able to attend the K-Cultural Festival this year, I encourage you to attend the next one, because I really struggle to see the downsides. Because really, all that good stuff and yet the K-Culture Festival was FREE ENTRANCE? We have to see it before we believe it.

If I had to pick one thing that I would have changed about my K-Culture Festival experience, it’s that I would have made a replica of myself, so I could be in multiple places at once. Alas, science has not progressed that far. So maybe I’ll just have to go back next year, to have my third round of milk tea. But hey, it suits me more than well.