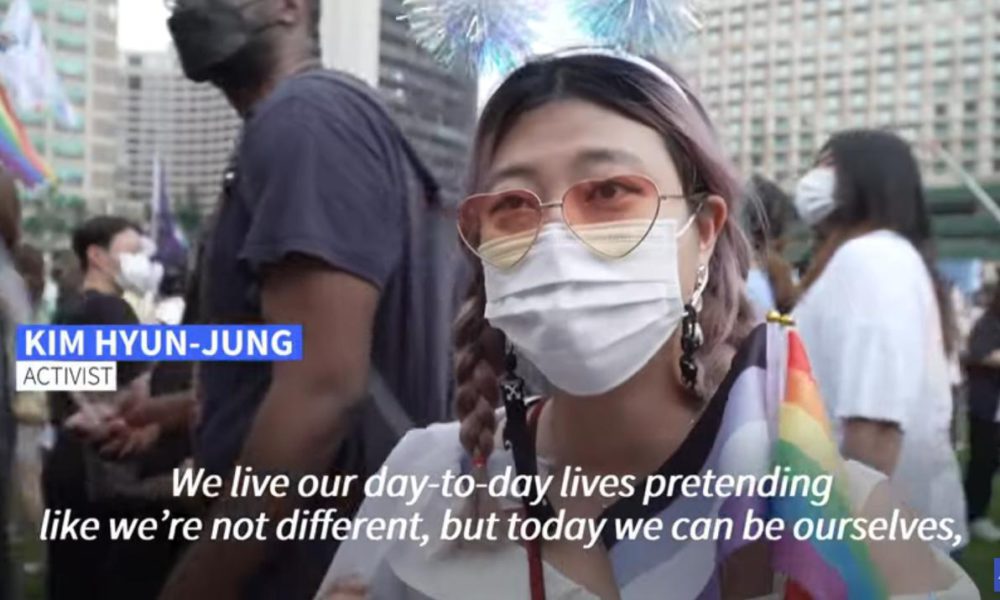 ITAEWON-DONG, Seoul, South Korea — K-pop star Holland, real name Go Tae-seob, was brutally attacked in the Itaewon commercial district of the South Korean capital of Seoul on Wednesday. A spokesperson for the Seoul Metropolitan Police Agency confirmed that the singer had been assaulted.

The Itaewon district is known for its cosmopolitan dining and nightlife, with upscale Korean barbecue restaurants and bistros, as well as low-key kebab shops that cater to a late-night crowd. Friendly beer bars and gay pubs sit alongside hip dance clubs where DJs spin hip-hop and house music.

In a tweet about the incident, the Gay Out pop star wrote; “Last night, I was walking around Itaewon with my manager and a friend. Suddenly, a stranger approached me and punched me twice in the face, calling me a ‘dirty gay’. Now I have a scar on my face and I’m going to the hospital soon.

Holland also noted; “This is obviously a hate crime. The fact that my sexuality as gay is public should never expose me to this kind of violence. Nor any other LGBT+ and all seniors, women and minorities in this world. What is happening in 2022 shows the sad reality of LGBT+ human rights.”

This is obviously a hate crime. The fact that my sexuality as gay is public should never expose me to this kind of violence. Nor any other LGBT+ and all seniors, women and minorities in this world. This event in 2022 shows the sad reality of LGBT+ human rights.

In late March earlier this year, the singer revealed during a live stream with fans that he is currently seeing someone special, but he didn’t give many details about his new partner.

PinkNewsUK reported that the K-pop singer was asked by fans in chat during the live stream about his relationship and that he “actually has a boyfriend now.” Holland repeated the happy news with a smile, cheekily adding “damn” at the end.

so.. i have a boyfriend pic.twitter.com/K3HS62vvqQ

In an interview posted by Daily Mirror reporter Zahna Eklund, she noted that being an LGBTQ+ celebrity in South Korea isn’t always easy. The subject is still very taboo and homosexual marriage is not yet legalized. So when Holland burst onto the K-pop scene in 2018 as the industry’s only openly gay star, he had to fight tooth and nail for recognition.

Holland first opened up about his sexuality to friends when he was a teenager, but admitted he didn’t tell his parents until he made his idol debut in 2018. The 24-year-old singer also said he was bullied at school because of his sexuality, writes Eklund.

In its annual report on human rights in the world for 2022, Human Rights Watch reported;

The LGBT rights movement in South Korea is growing but continues to face hostility and severe discrimination, especially within the armed forces. In October, a South Korean court ruled the military unlawfully discriminated against Byun Hee-su, the country’s first openly transgender soldier, when it fired her after undergoing gender affirmation surgery in 2019. The court ordered his reinstatement, but Byun deceased by suicide in March.

In schools, LGBTQ+ children and youth experience severe isolation and abuse, including bullying and harassment, a lack of confidential mental health support, exclusion from school curricula, and discrimination based on gender. gender identity.

Progressive activists and lawmakers have actively advocated for the National Assembly to develop and pass a broad-based national anti-discrimination law protecting LGBTQ+ people as well as women, children, people with disabilities, the elderly, and foreigners. But the government has made no significant progress on such a law, citing anti-LGBTQ+ opposition from a conservative Christian group.

Korean evangelical churches and religious organizations also continue their efforts to try to effectively erase LGBTQ+ Koreans by marginalizing and demonizing them.