Roma (VNA) – Banh Xeo, a crispy Vietnamese pancake filled with pork, prawns and bean sprouts, won second prize in the culinary competition, part of the Bagnara ethnic culture festivalwhich is held in the Italian region of Emilia-Romagna from September 1 to 4.

This year’s edition featured booths from 25 countries, attracting over 15,000 visitors.

The people who prepared traditional Vietnamese dishes at the event were members of the Vietnam-Italy Cultural Bridge Association, who volunteered for this work. 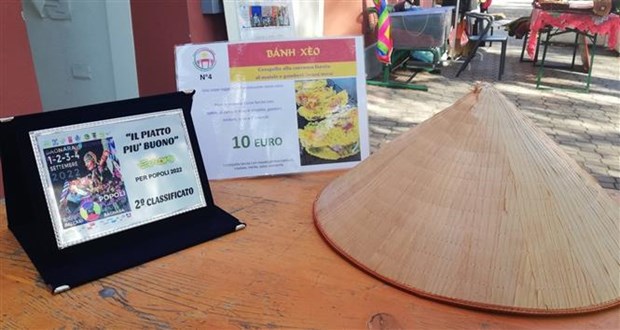 Banh Xeo won second prize in the culinary competition, as part of the Bagnara ethnic culture festival held in the Italian region of Emilia-Romagna. (Photo: VNA)

Le Thi Bich Huong, president of the association, said the annual festival aims to build bridges between foreigners’ associations in the Emilia-Romagna region, adding that it provides an opportunity to promote Vietnamese culture to through gastronomy in Italy.

The association also devotes part of the profits to charitable activities, she said.